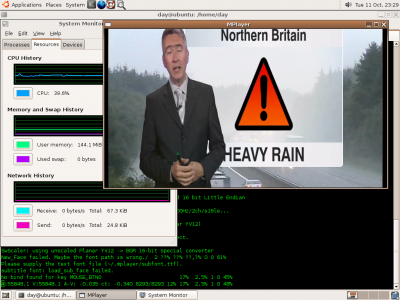 ( Note for non UK readers: It honestly doesn't rain all the time up north. That's why there's a big exclamation mark in a red triangle. He's surprised. )

Anyway, this has been quite an experience. Thought I'd share it and maybe some people will read this and decide to put their time towards something more productive.

As you can see, I've now managed to get to the point where I can tune into a freeview channel and watch it stream through mplayer. Not earth shattering but it's taken long enough to get here. Next step is to get mythtv up and running. The aim is to use this thing as an appliance rather than as a PC that happens to be able to show freeview channels when you type the correct series of incantations at a terminal. It needs to be useable with just the remote control and the keyboard can go behind the sofa until the inevitable emergency happens.

With this Media PC saga, I had to return 3 faulty DVB cards of various makes to ebuyer (great service from them) before finally getting a working Hauppauge WinTV-Nova-t PCI Freeview Receiver.

I say working, but it was still dropping frames all over the place and the audio was mostly ear piercing squeeks and pops. But there was definitely something happening so I kept the card. Looks like that was a good idea as it turned out to be a software problem.

The drivers and software that accompany the Nova-t are, unsurprisingly, for Windows XP. I always planned to get the Media PC running mythtv on Linux of some flavour. But not being much of a Linux expert, I thought I'd test all the hardware on Windows first, seeing as that's what is officially supported.

Well installation was easy enough, but the Hauppauge software was terrible. Just peruse the comments left by buyers to get some flavour of the problems. I tried downloading the latest drivers, including the German ones from the German website. Still dropping frames. I tried using different software to watch and record the TV. MediaPortal was the best of these but chewed up over 300MB of RAM. Just to show the front page menu. Yikes. That'd be the .NET effect? Still dropping frames there too. So I gave up for a few weeks.

Then a friend suggested I take the Nova-T round to his house and we try it out on his KnoppMyth box. In just a few hours of fiddling we had it working perfectly. Great - no hardware problems with the Nova-t at least. Didn't take us long to decide to wipe my box to get rid of Windows (and the only copy of a few digital photos - oops) and try KnoppMyth there. Of course, this didn't go entirely smoothly either. KnoppMyth didn't like my ATI graphics card. I'm new to Linux and didn't know that just choosing the cheapest fanless graphics card is not a good idea if it happens to be made by ATI. Well we all learn from our mistakes so I won't be doing that again. Before giving up on the ATI card, I switched distros from KnoppMyth to Ubuntu which I like a lot. It couldn't handle the ATI card either, so I swapped in an old Kyro II board from the Dusty Cupboard of Computer Parts That May, One Day, Be Useful. That works a treat with the generic VESA drivers, but I had to disconnect the noisy fan. No problems yet <touch wood>

Once I could see what I was doing, it was basically just a case of following the excellent instructions given in the Ubuntu Wiki. And now I can actually watch telly on my Media PC, without any dropped frames or hideous squeeks. A mere 3 months after I bought the parts and first put them together. Now, I wonder what the weather will be like down here tomorrow...