Well it looks like my Ajax Hello World will have to go on hold a bit longer. I've started playing a bizarrely addictive, online, multiplayer, Ajax powered board game over at llor.nu.

There are still a few quirks to be ironed out, but after a few days play, I've started to build up my own real estate empire. Yes, it is I, Mr Scruff, currently languishing in 43rd place. Perhaps you've paid me a few units of the nameless currency when you stayed in one of my lovely hotels?

I'm still quite some way off the leader board. In fact, after a good start, I'm getting further behind with each day. It would seem that there are a few resourceful types playing the game automatically via scripted bots. There was quite a discussion about it over at RedHanded. Even though this may lead to Mr Scruff being relegated from the top 50, I'm all in favour of allowing bots to play the game and test out new strategies. Interestingly, the developers are quite happy to allow the situation to continue. In fact, the plan is to open up the API to positively encourage such behaviour, although they acknowledge the difficulties in balancing that this will bring; the vast majority of players still play "by hand".

Given the speed with which a successful bot can take over, it's difficult to keep track of the leader board. And when someone does take over, how can we tell how quickly they did it and what strategy they are using? Currently the llor.nu interface only provides a Top 20 table with a few live statistics for each of the leading players. And you have to be logged in to see it. Which means that the first I knew about the explosive rise of DotCom was from reading a comment in the RedHanded article. Apparently, DotCom went to the top in 3 days, at one point quickly doubling her buildings to over 600!

Really? Darn I missed it. So I decided to keep a record of the Top 20 for myself, so I can catch such events in the future.

And now I get back from a long weekend away, and it seems that DotCom has vanished from the Top 20. Has she simply been overtaken by kevin, the legendary leader from my first few days in the game? Well, judging by this graph, it looks like there was a bit more to it than that. After such a rapid rise, she lost over 25 million in 5 minutes to disappear from the leader board completely. 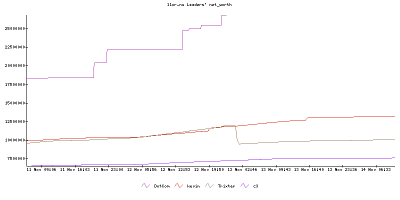 Don't let yourself miss such headline events in the future. Now you can graph these stats for yourself. I've created a snapshot of the llor.nu Top 20 which links to graphs of the various stats of each player for the past week. The interface isn't quite finished yet. If people are interested, and I have the time, I want to provide easy access to the historical stats and a simple way to graph a statistic for several players at once for comparison. Or then again, maybe I should wait until the llor.nu guys do this for us?

Have fun and keep rolling, Mr Scruff needs your cash.

I could throw together an XML feed of the Top 20 if it makes things easier for you. I'll ping you when it's ready.

Ya know.. for some reason, I read "Mr. Scruff" and I think of Scruffy, the janitor from Futurama.

You know, that's really quite a handy graph you have there. I think the only thing that could make it any better would be a graph keeping track of player position on the board, but of course that's much more difficult to put together than statistics that's already been done and only requires constant monitoring to put together.

DotCom went from zero to #1 rich via some bug, which Buffington addressed...I don't know what it was...but it the history on the subject exists on the llor forums. Along with the bug being fixed, DotCom was no longer in the top 20 last time I looked.

The question of balancing the game between early players and later players, and human players versus bot players, seems to still be quite open.

As are the "random is not random" issues that I have been discussing in the forums.

Michael: Thanks for the offer of a feed but the screen-scraping seem to work fine for the moment. A feed would be the "right way" to do it but wouldn't add any new features so feel free to concentrate on any more pressing issues.

srhuston: I'm not familiar with Scruffy, but I can tell you that Mr Scruff is a very good artist on the Ninja Tune label. You should check him out.

the bots have benefitted us fleshies, too.....:)

This is quite handy. I'll be subscribing to the feed, for sure.

When I first saw the Mr. Scruff name on llor.nu, I wondered if it had any relation to the Ninjatune artist. I'm glad to see you've got good tastes in music. ;)

anyway, a small suggestion: could you make the ranking graphs upside down to what they are now? it would be a lot more intuitive if people moved up on the graph when they moved up in rank.

also, a way of putting multiple people on the same graph would be nice.

keep up the good work!

nowwhosannoyed: You can graph stats for multiple players at once. I just haven't tied this up to the index page yet, so you have to craft the URL manually.

The plan is to spice up the index page using radio buttons in the table to select the players to graph, then choosing the stat to graph for those players. May use Ajax like llor.nu to make it nice and swish.

For now, if you want to do graphs manually, heres a quick how to:

The base URL is http://daybarr.com/playpen/llor.nu.scores/graph.php

Then add a question mark (to start the "query string") and list the parameters. Graph types are given by type=net_worth, type=rank etc. List of players is given by players[0]=Mr%20Scruff players[1]=nowwhosannoyed etc. Separate multiple parameters with &.

For example, URL for above graph of our net worth is:

The %20 in my name is necessary to encode the space into the URL.

thanks for the tip.

llor is down! Looks like a dns problem, anyone happen to have the IP cached so I can at least try to play?

good, take a rest, try to fix everything first.

I love the graphs, but I have one question. I know it's possible to have stats from multiple players at once, but is there any way to display data for a specific time index? For instance, even just being able to display the last two hours would be quite useful.

Either way, thanks for the graphs.

This is just getting better and better. Good work.

I'm interested in your idea to track the stats page. I'm most interested in the total cash stat, from which we could finally see how much inflation there actually is in the game.

also, graphs of average cash per player and buildings per player would be interesting to see as well.

keep up the good work, your graphs keep getting better and better and I use them often.