Stockem is a clone of the classic Sokoban game with its own unique levels. A puzzle game with a simple premise, Stockem starts easy but soon gets fiendishly difficult. The aim is to fill all of the “parking spaces” with “marbles” by simply pushing them around a maze-like board. 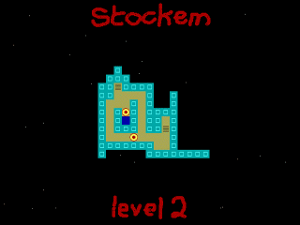 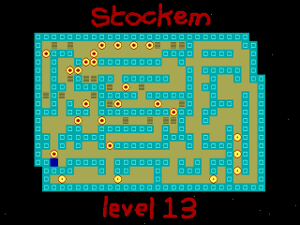 Notes for the technically inclined

This game was produced on an Amstrad 286 PC in my bedroom some time between 1992 and 1996. The code was written in QBasic which was included with certain versions of MS-DOS and Windows 9x. The bundled QBasic had just an interpreter and no compiler - programs had to be run from the source in the IDE. This version has been compiled using the QuickBasic compiler which I found at university in 1996. Unfortunatley, I've lost the source code so I can't share this too. For more information on QBasic, and more QBasic games, a good starting point is QBasic.com.